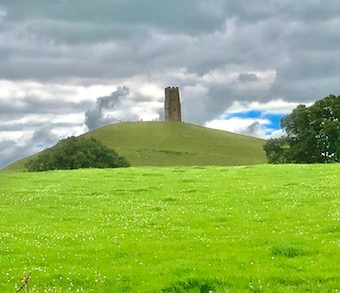 A short but magical walk in the green lanes and meadows around Glastonbury Tor. It’s only a hop and a skip from the village, a landscape of short steep rises and falls, above which the Tor stands out like a beacon. I’ve known this piece of country all my life, and have added and subtracted the tower on the Tor in my mind’s eye countless times, trying to decide if the hill itself would be so remarkable and eye-catching if it wasn’t completed by that finger of stone pointing up to the sky.

A network of lanes surrounds the Tor. Some are proper green lanes with grassy floors and thick hedges through which you get an occasional striking glimpse of the hill, its smoothly rising back silhouetted against the sky, bristling with the tiny figures of pilgrims ascending to the crowning landmark. Other lanes are stony or laid with cracked old tarmac. All are narrow, single-track roadways, overhung with ash and beech, a few of the ash looking sick and limp from ash dieback disease. A perfect comma butterfly sunned itself with scalloped wings outspread, not a tatter in its fabric. 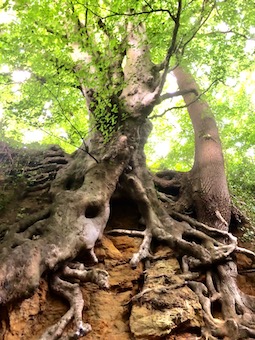 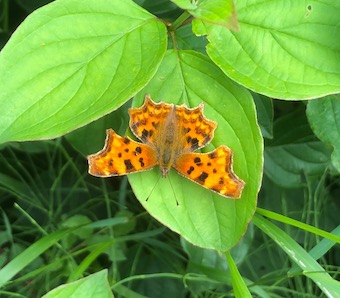 We walked a rising lane through a holloway cutting. Beech trees clung to the exposed strata of rock with roots as grey and knobbled as old men’s fingers. Out along a ridge with grassy verges, where giant hogweed raised multiple heads packed with chunky purple and silver seeds. Northwards we had a wonderful sunlit view of the whole Mendip range from the little quiff of Crook Peak in the west to the hills beyond Shepton in the east, with the towers of Wells Cathedral shining at the foot of the ridge. Nearer at hand lay shapely Launcherley Hill, always a magnet to my eyes, the archetype of a West Country hill, a rounded patchwork of pastures, hedges and trees. 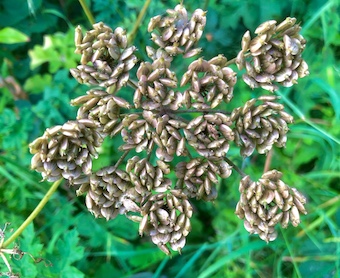 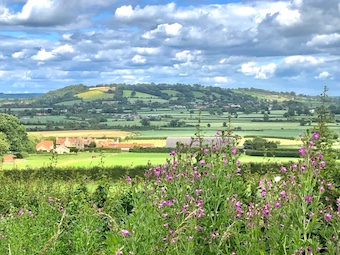 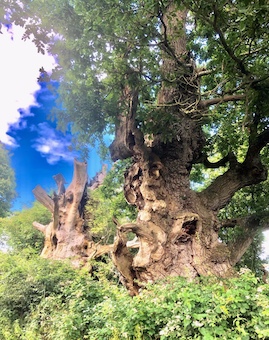 Back round the northern meadows, paying our respects as we passed the twin giants Meg and Mog, huge old trees now split, dried and skeletal, but still exuding a kind of ruined majesty.