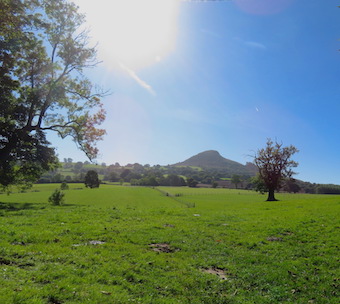 The River Severn’s estuary was at a fantastically low tide as we crossed the ‘new’ bridge on a day of no cloud whatsoever. Looking seaward through the stroboscopic flicker of the bracing wires, we could see the tidal outcrop of the English stones fully exposed and slathered in red mud. Downriver, the little hump of Denny Island off Portishead stood marooned in a huge desert of sand. Other sand and mud banks lay around the widening tideway like beached whales. Unwary strangers might even suppose you could cross the five miles from the English to the Welsh bank on foot and do no more than bespatter your spats. And maybe you could, if you were able to walk on water while negotiating quicksand, slow mud, sudden drops, fathomless pools, and the second highest tidal range in the world sneaking round the corners to cut you off. 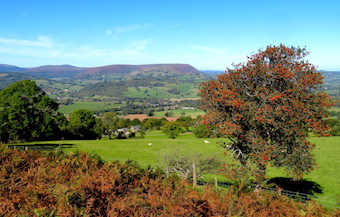 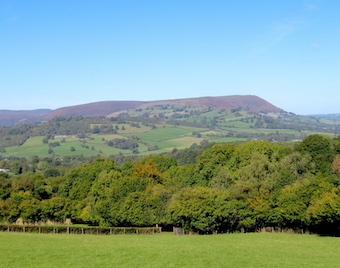 Over in Wales we hightailed it to Llanfihangel Crucorney, a placename whose sound put the immortal walking writer John Hillaby in mind of ‘a toy train scampering over points’. LC lies in the River Monnow’s valley that forms the eastern boundary of the Black Mountains and Brecon Beacons. It’s a great jumping off point for walks westward into those mountains, but today we were aiming east to climb The Skirrid (Ysgyryd Fawr, the ‘big split one’), a tall hill that lies north-south with its head cocked and spine raised like an alert old dog.

The Skirrid is made of tough old red sandstone lying in a heavy lump on top of thin layers of weaker mudstone – hence its history of slippage and landslides. We came up to it in cold wind and brilliant sunshine across fields of sheep, skirting its western flank through scrub woods, gorse bushes blooming yellow and holly trees in a blaze of scarlet berries, with the dark purple crags of the northern end hanging over little rugged passes of landslide rocks fallen in a jumble. 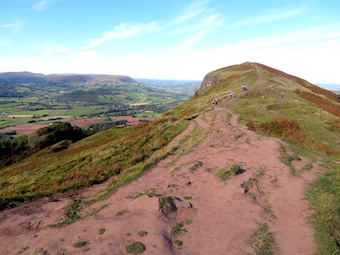 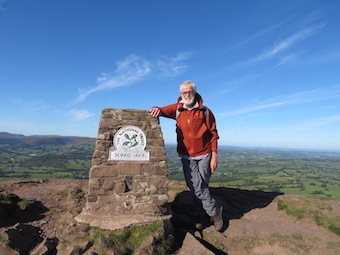 The ascent is short, steep and stepped, but it’s the sort of ‘starter mountain’ that families with six-year-olds can manage. Many were out – mums, dads, children, students, ‘maturer’ folk such as us, all hurrying to revel in this one-in-a-thousand day before the threatened reintroduction of lockdown in Wales should come into force.

Once at the peak in this unbelievably clear weather we gasped to see the landscape laid out in pin-sharp detail a thousand feet below and fifty miles off – Malverns, Black Mountains; farmlands rising and falling towards Gloucestershire and the Midlands; the slanting tabletops of Penyfan and Cribyn over in the Brecon Beacons; Cotswolds, Mendip, Exmoor; and the south Wales coast trending round into far-off Pembrokeshire.

Nearer at hand a grey streak of softly glimmering sea showed the tide rising in the Severn Estuary past Brean Down’s promontory, the slight disc of Flat Holm and the hump of her sister island Steep Holm, their lower edges lost in mist so that they looked like floating islands in some fabulous sea. 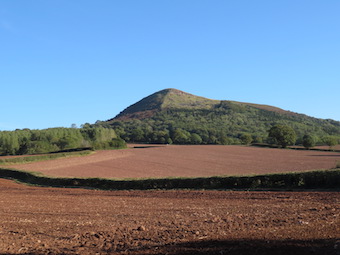