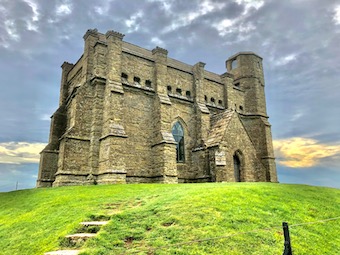 Abbotsbury lies on the Dorset coast a little inland of Chesil Beach, the notorious shingle bar on which hundreds of ships and thousands of seafarers came to grief in days of sail. On stormy days the waves pound the bar with a menacing roar, but today all was still and calm under a cloudy sky as we set out among the rich gold stone cottages of Abbotsbury with their grey thatched roofs.

How did Blind Lane earn its name? An old holloway floored with flint and dark iron-rich stone, it led away up the hill behind the village. Black cattle grazed the strip lynchets or terraced scars left by medieval ploughing. 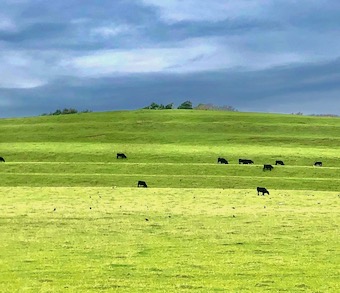 It was an exhilarating walk westward at the rim of the down, shoved along by a strong easterly wind. Neolithic long barrows and Bronze Age round ones pimpled the turf. The gorse-smothered Iron Age ramparts of Abbotsbury hill fort stood remarkably well preserved. Ahead opened the dramatic seascape and landscape of the Jurassic Coast, its cliffs faced with gold and white as landslips reveal the underlying strata. Further round Lyme Bay the colours darkened to the greys and blacks of the tottering cliffs beyond Lyme Regis, some of the most unstable land in these islands. 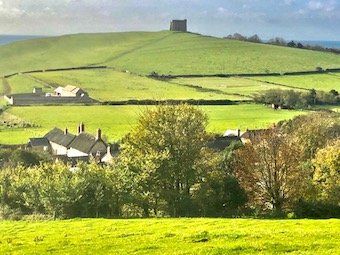 Down the single sloping street of West Bexington, and back east into the wind along a beach of pebbles mumbled so small by the sea that they resembled coarse sand. Ahead the long curve of Chesil Beach terminated in the sloping wedge of the Isle of Portland with its squared-off cliffs, quarried for freestone since Roman times.

A short sharp climb inland across a corrugation of lynchets to reach St Catherine’s Chapel on its round hill, with a superb view down over Abbotsbury and its mighty medieval tithe barn. Spinsters in fading hopes of securing a man would climb to the chapel and pray: 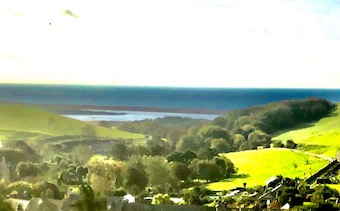 The coda was then whispered: