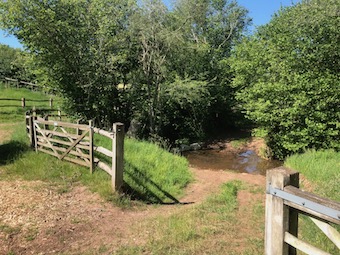 Leaving the village early on a hot windy morning, we skirted the west end of Quarry Hill. Ash dieback disease has got a firm grip of the young trees here, and is reducing them to pale skeletons in the wood. On the far side we crossed the dry yellow pastures of Dragondown where the cattle plodded one after another towards the shade of oak trees now turned as dark as iron by this two-month drought.

In the quiet green valley of the Russet Mere stream beyond Dragondown, a private revolution is taking place. The old knockabout farmhouses, beautifully sited but long neglected, have been bought up and spruced to the nines. The former dairying pastures of poached slopes and tough grass have been transformed into wildflower meadows thick with buttercups, knapweed, clovers and silky grasses with lovely names – Yorkshire fog, cock’s foot, crested dog’s tail. Aspens in stout tree guards, rustic park fencing and carefully signed paths all point to new influences, welcome ecologically, but oddly troubling too. At what point do the economics of everyday farming fall below feasibility, obliging the old farming families to give way to well-heeled conservers of the countryside? 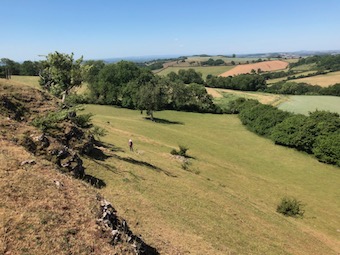 Food for thought as we wandered the path through these delectable meadows and up to the strange gritty outcrop called Monk’s Kitchen. From here a really wonderful view down over the track of an old railway sneaking round the foot of Quarry Hill, and out across fields and woods to a prospect opening over the distant coast and the Quantock and Exmoor hills beyond.

The path to Holdfast Farm below had been impenetrably blocked with a crop of wheat. Damn you, farmer! We pushed our way along the field margin ploughed and sown right up to the spiky hedge. Hmm, yes, old style farming ahoy!

Up on the rise beyond we stood looking down on our neighbour village with its tall grey church spire, roofs and trees – a classic English view in early summer.

In a quiet green valley beyond. 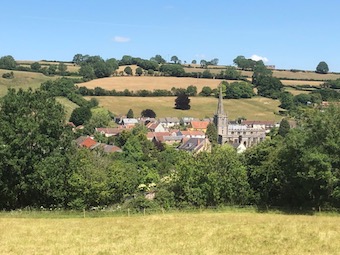