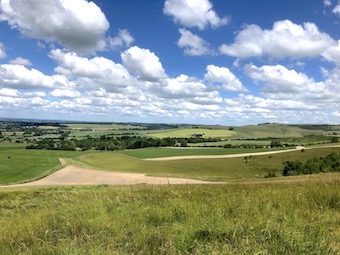 We went to walk east of our village where the landscape turns from craggy limestone hills to long downs of chalk and greensand, moulded by rain and wind into a gently rolling, green and white countryside.

Near the start we came across an all-too-familiar scene – a mile or so of pasture through which the footpath ran unmarked over neglected stiles, to pitch up at a done-up farmhouse where the right of way passed across the farmhouse garden. An unguarded electric fence blocked access to the gate leading into the garden, where all signs and waymarks had been removed, to give the impression that there was no right of way. We hollered for the owner, who first sent the dog out, then somewhat shamefacedly emerged from the house and admitted that, yes, the path did cross her garden. No apologies for the electric shock we got crossing the fence, however! 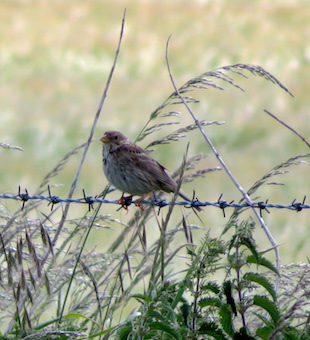 It’s been very noticeable in recent times how many rights of way have been obliterated or obscured, waymarks and signposts removed, and obstacles erected around nice country houses whose new owners have done the properties up to the nines and decided unilaterally that the rights of way they accepted when they bought the house can be quietly abolished. Poverty of resources at County Hall has led to the laying off of many of the county Footpaths Officers whose job it is to keep our wonderful and unique network of paths open by making sure that householders and landowners do toe the line about maintaining access. The Ramblers organisation do the best they can – and we walkers are the best weapon they have in the fight to preserve what amounts to an irreplaceable national treasure. Keep walking those paths, folks! Rant over! 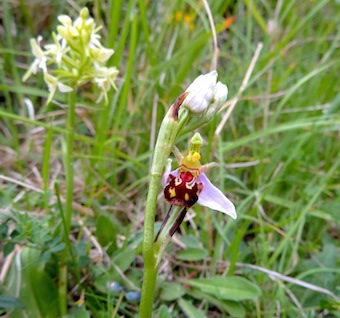 Up on the downs the views were breathtaking, far north to the Cotswolds, far south to Salisbury Plain. John Morgan was an unfortunate felon hanged for murder on these downs in 1720, and his name lives on at Morgan’s Hill, now a nature reserve where we picnicked among pyramidal orchids, yellow rattle, scabious and blue butterflies.

From here the Wessex Ridgeway took us south through a long valley where I was thrilled to see a corn bunting on the barbed wire fence between fields where oats and beans and barley grow. A stout little bird with a streaky breast, increasingly rare as its habitat and food sources have come under pressure from modern pesticides. 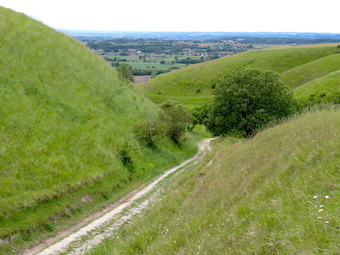 The homeward path led over Oliver’s Castle hillfort, where in 13 July 1643 an army of Parliamentary soldiers was routed by Royalist cavalry, many of them pursued at a panicky gallop till they tumbled in a terrible heap of men and horses down the steep face of the downs into the cleft known now as the Bloody Ditch.

No such awful scenes on these slopes today – just marbled white butterflies, bee orchids and lesser butterfly orchids, and of course the sky-filling songs of larks. 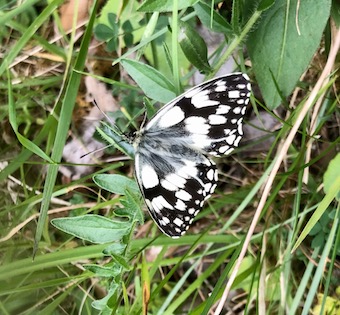 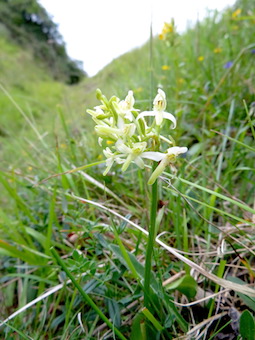 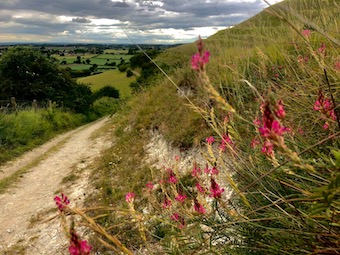